On July 12th at 10pm the Big Brother 14 live feeds finally got turned on and a lot of things have happened in the game so far. Here’s a breakout of what has happened in the house and where this game might go in the next couple of days. Then again, it’s Big Brother so anything can and will change depending on many multiple factors. 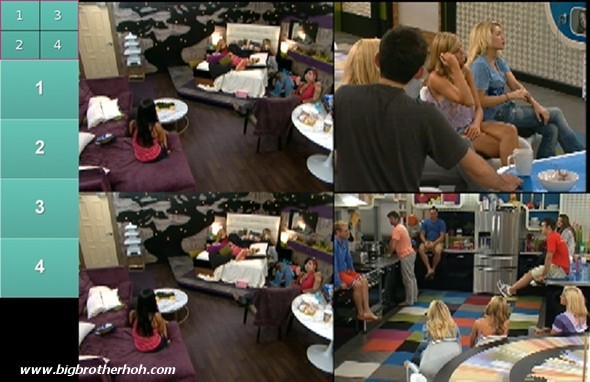 When the live feeds got turned on we found out that Willie nominated Frank and Kara for eviction. We’re nearly a week away from the next eviction so there’s a lot that can happen to change these events. That means it’s not really worth guessing who is in the most immediate danger as many sides of the house continue to argue and debate.

The sides of the house so far seem to be split down the middle by coach. Janelle and Britney stand on one side while Dan and Mike Boogie on the other. Janelle did play with Mike Boogie in All Stars so not having them teamed up is a little different change of pace. I’m assuming that Janelle might still be a little angry over Mike Boogie evicting her at final 3.

It seems that the Have and Have Nots this week are Ian, Shane, Ashley and Danielle. They’re sleeping on curved platforms which seem to be causing problems for some. Ashley spent the morning rubbing Icy-Hot on her back thinking the live feed cameras didn’t have night vision. She also didn’t think the cameras could see her in the Have Not room so she went there to cry.

The players for the Veto this week happened to be Frank, Kara, Danielle, Ashley, Shane, Wil and Willie. JoJo ended up being picked as the host. The live feeds showed that the Veto ended up being won by Shane who said he wont end us using it. But we still have a couple of days until the Veto meeting so anything can happen until then.