Shane, Ashley and Danielle Discuss Game in the Hammock

At 10:05pm on the live feeds Shane, Ashley and Danielle are in the hammock chatting. 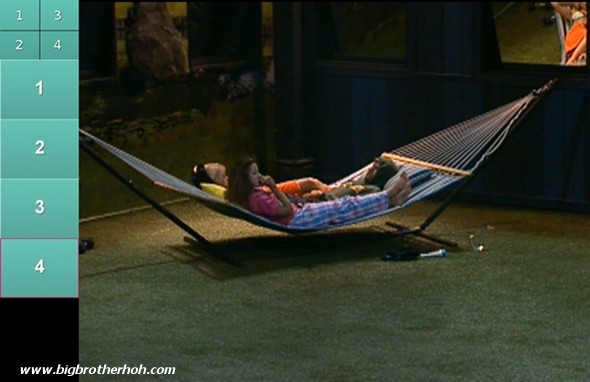 Shane points out that after what Wil did to Kara last week he’s not sure about trusting him. He states there are 8 players and 4 coaches and it’s not a big of a stretch for them to mix up the player and get new coaches. Ashley says that Mike Boogie never even talks to her about anything in the house. She says that she doesn’t trust Ian anymore and that he is very vindictive and conniving. Shane says if he wins HOH he’ll put up Wil and Ian because putting up the 2 strongest isn’t a good idea.

Shane says that Janelle’s plan is to take Danielle and use her to go after Mike Boogies team. He says that he thinks Danielle is very smart but she is confused as why he would think that. He says that each side will try to take out the other side one by one and the coaches will keep their top picks safe. Shane and Danielle explain to Ashley that there isn’t enough days for the coaches to become players. Shane tells them that he knows he is gone unless he wins HOH but he’s willing to work with Ashley, Danielle, Jenn and himself as a final 4.