Mike Boogie and Janelle Talk About Shane Winning the Veto 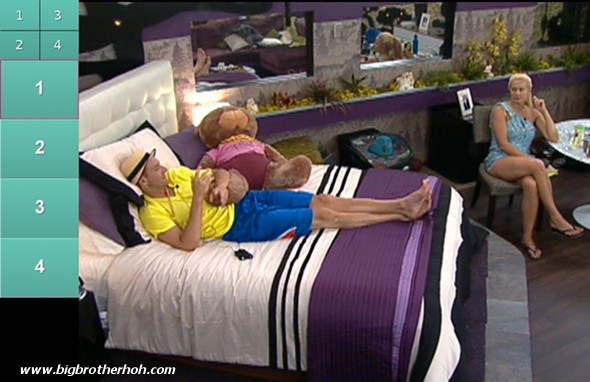 A little after 3:00pm the live feeds come back and Janelle and Mike Boogie don’t think Shane is as stupid as they once thought but think he’s somewhere in the middle. Mike Boogie asks her who she thinks they should send home this week. Janelle thinks that Danielle is a waste of an HOH and that maybe JoJo should leave this week. Janelle says that JoJo did a lot better than she thought she would do in the veto competition today she did better than Frank. Mike Boogie says that getting rid of Shane is going to be very tough to do. Janelle says that they should of just backdoored Shane and not have let him play for veto. She also tells Mike Boogie that if Danielle won HOH she could be talked into putting up whoever they wanted over JoJo. Janelle and Mike Boogie think that if they really get put into the game that they can really destroy all the newbies.