Mike Boogie and Frank Talk About Ashley Being Upset at Jenn

At 8:45pm on the live feeds Mike Boogie and Frank are in the backyard talking. 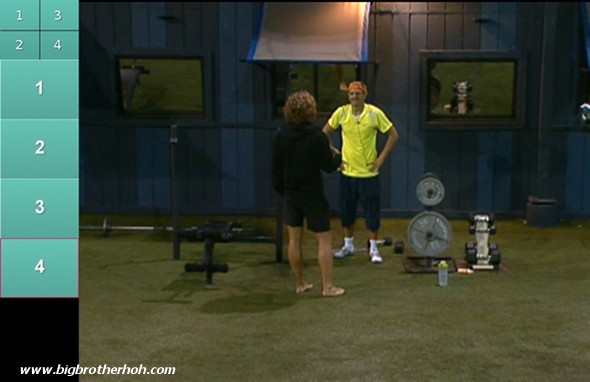 Frank is explaining to Mike Boogie everything that happened last night between Ashley and Jenn. He tells Mike Boogie that Jenn came up to him and told him that Ashley was crying in the bathroom saying she misses Kara. Frank says he could see Wil, Joe and Jenn starting to get pissed so he decided to take care of it before it got out of hand. He took Ashley into the HOH to talk to her alone to resolve any issues she might have. Frank said he felt very good about the conversation and it was all figured out.

Frank says that Janelle and Wil came up and sat 2 feet next to her face. Frank says the great thing is that he came out better than Wil and Janelle. Mike Boogie agrees and wishes that people in this game would just relax a little bit sometimes. Mike Boogie adds that all she has to do is sit around and just vote their way and do nothing until they’re at final 6. Mike Boogie then adds that it amazes him that people they put in this house have no clue on how to play the game.