Janelle Tells Danielle That Jojo Has Been Talking Bad About Her

At 9:50pm on the live feeds Janelle and Danielle are in the HOH chatting. 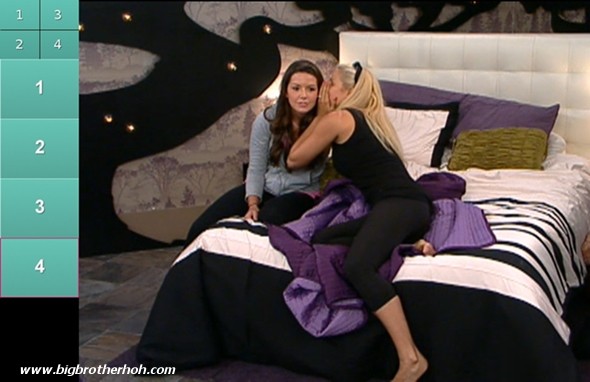 Janelle tells Danielle that last week when Willie was HOH that JoJo was talking bad about her while in the bath tub with her. She says that JoJo has been calling her fat and said that her legs were very huge. Janelle is trying to start a fight between JoJo and Danielle to see if JoJo denies it. Danielle clearly is angry from hearing all about this because she talks about her weight a lot in the house.

Janelle asks her if she’ll go downstairs with her call her out on everything that she said about her. Danielle says she’s not that type of person because she’ll start crying during the confrontation. Janelle says she will do it because if she said those things about Danielle she might be saying them about her as well. Danielle is saying that she probably is talking about Janelle as well because they are almost the same size. Danielle says that this really makes her very self conscious about her body now. She then asks if anyone else has been making fun of her body and Janelle says it has just been JoJo.