At 7:35pm on the live feeds Janelle, Ashley and Danielle are in the bedroom talking. 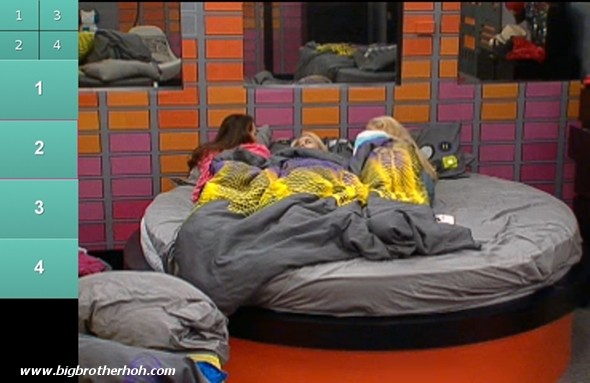 Janelle, Ashley and Danielle talk about having sore stomachs today. They are trying to figure out why there stomachs hurt so much and Janelle thinks it’s her period. Danielle on the other hand thinks it’s the all rich food that Joe has been making. Janelle says that she she saw a jar of medicine but the label was covered and thinks its Mike Boogies. She talks about how Mike Boogie got his genital warts removed on Dr. Will’s shows.

Danielle asks them if she’s going home and they say JoJo will be evicted. Janelle says that her whole team wants to keep Danielle over JoJo so she helps them get out Shane. Danielle says she wont have any issues with putting Shane on the block if she wins HOH. Danielle wants to do her laundry soon because she thinks the backyard will be closed for the endurance competition. Janelle states it’s not going to be endurance on week 3 and it might be a crap shoot or a question and answer. Danielle says that they are around 23% done and she doesn’t think the twist will bring anyone back.