Dan and Janell Talk About Who Might Get Nominated

At 9:00pm on the live feeds Dan and Janelle are in the arcade room chatting. 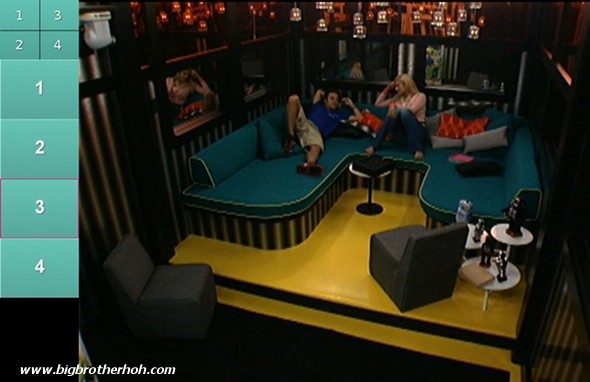 Janelle tells Dan that Frank is very person dangerous in this game and they need to try and get him on the block. Janelle states that Frank is putting on a lot of charm with Britney. Dan thinks they need to interrupt their talks as much as possible. Janelle keeps stressing the fact on how dangerous Frank really is in this game. Dan says that they need to make sure Boogie doesn’t win the coaches competition. He says if that happens that Janelle will most likely have 2 players on the block.

Dan says that he thinks Boogie looks really scared now that Shane on HOH. Janelle says she has a team of floaters because they never win any competitions. Dan says he’s now convinced there will not be a twist that involves the coaches. Dan says the only thing that will keep Frank off the block is a deal or an alliance. Dan says that Shane will make his own decisions and really listen to Britney’s advice. Janelle is worried that Wil and Joe are going to be put on the block. Dan points out that those 2 players haven’t won anything Janelle can use that to bargain with Shane.