Britney is Coaching Jojo on How to Stay in the House

At 12:40pm on the live feeds Britney and JoJo are in the HOH room talking. 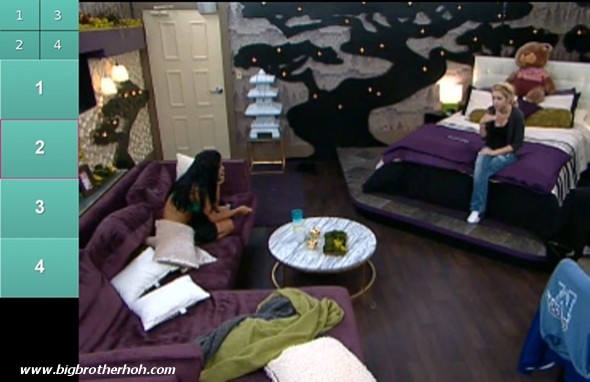 In the HOH room Britney tells JoJo to calm down and stop talking so much game with people. Britney says that Danielle thinks she is talking bad about her and JoJo wonders why. Britney says it was because she brought up her name when talking to Frank to tell him that he had options during nomination. Britney says Danielle is downstairs and being friendly and laughing with Janelle which is not a good sign for her. Britney says to not say anything bad about anyone in the house because they will find out that she did. Britney says if she gets voted out it will be because of personal reason but if you don’t it is strategic.

Britney says that Frank came up to the HOH and told her that JoJo tried to pitch a deal to him. Britney says that Frank is upset at JoJo for even trying to cut a deal with with because she wanted him out. Britney says that she needs to distance herself from Shane and for her to talk with other people in the house. Britney explains the votes and how Mike Boogie won’t leave Janelle for our team. From their perspective 6 on 2 is very good for them for the next couple of weeks. She asks JoJo why would they throw away 3 for 2? JoJo says because they would gain two strong players who would be loyal.