On June 26th at 10pm PST the Big Brother 16 live feeds finally got turned on and a lot of things have happened in the game so far. Here’s a breakout of what has happened in the the first couple of hours after the live feeds started. 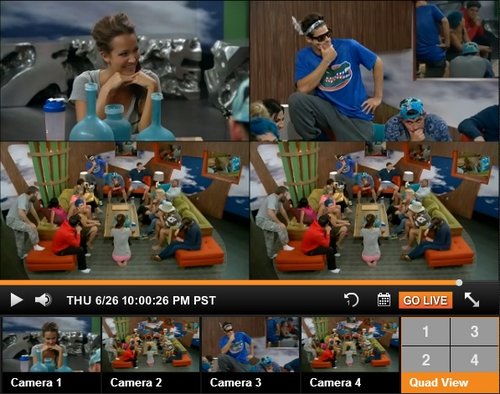 When the Big Brother 16 live feeds went live the first thing we saw was everyone acting as if they frozen. Then they greeted us with a crazy dance party and with Joey & Hayden streaking naked through the house shortly after everything went live.

There was also lot of shout-outs to family and friends from all the houseguests, including one from Frankie to his famous sister Ariana Grande. He was so obvious that we weren’t sure if he had already told the rest of the houseguest who his sister is.

It appears that Zach is very close to Frankie and that they have made a final two alliance. Christine and Nicole seem to be teaming up but it’s not clear if they are working together. It also seems that Frankie and Christine also have some type of deal.

The first night of the Big Brother 16 live feeds are pretty exciting all around. One of the negatives is that too many conversations are taking place all at once and its hard to follow who is really aligned with who.