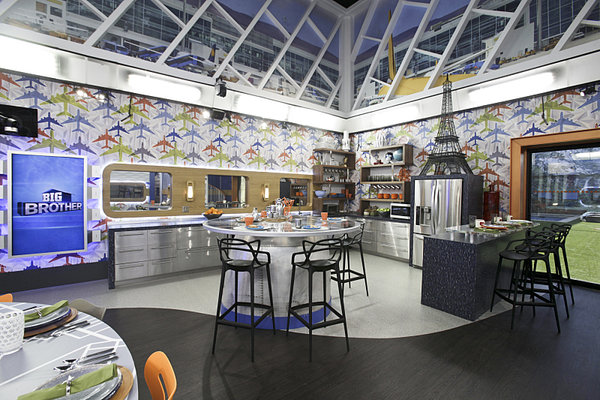 The Big Brother 18 house pictures have been leaked over two weeks ago by ET, but now we’re getting the official photos from CBS. Not only that but we’ve got details on how this theme actually will tie in to the season’s twists.

Normally the Big Brother house is designed months in advance and has little to do with the actual game. Not the case this time. Executive producers Rich Meehan and Allison Grodner have revealed that portions of the house this season will associate themselves with the theme of the summer.

The new kitchen layout is just what you’d expect, but unlike some recent seasons we’ve got a normal fridge and even a microwave. Plenty of setting around the island and breakfast bar. Also note there are twelve seats at the table and the Memory Wall.

The photo booth seems to be gone from the lounge area this season. They did begin to phase that out in the last few seasons and it won’t be missed. The huge departures sign is pretty prominent and looks great. Maybe they’ll change with the words up there for and HOH competition.

The bedrooms have a really nice themes. The British room won’t get as dark anymore though with glass doors through the phone booth. That also means you can be seen if you’re sitting in the wrong spot for your strategy chats.

Lastly, the HOH room has a fish tank for the headboard is very neat and could be what we end up seeing for the feed fish cam. They have also covered up the sky bridge on the second level so you’re not as see though as last season.