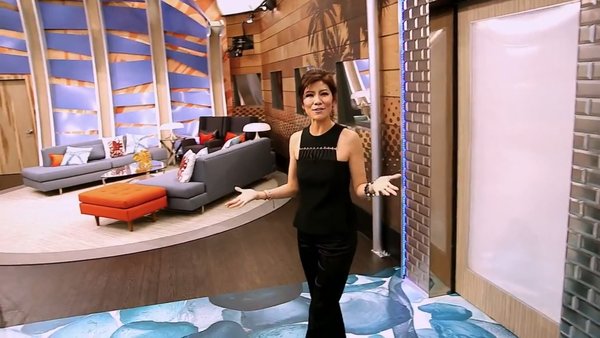 Julie Chen gives us on a tour of the newly designed Big Brother 17 house from the colors to the theme of all the rooms. She walks through the house and describes what each room is about and why its unique theme this summer will visually impress the houseguests and the viewers.

The beach theme that the house has this season might have something to do with the 22-foot tall wave wall in the is placed in the living room. Alongside that the house will also feature other similar themed rooms that include coral and driftwood decorated throughout the house.

For the first time ever, there’s a very cool glass sky bridge is made out of plexiglass which means it’s good for eavesdropping on fellow houseguests. But those perching themselves in the sky will have to be careful, as the clear floor means they can be easily seen from below.

The three downstairs bedrooms feature Las Vegas, comic book and ocean themes, while the HOH room is sky themed which makes sense, since it’s on the second floor. As usual, viewers won’t get to see the Have-Not room until the show reveals it to the houseguests.

Don’t forget that Big Brother will start on an special 2-night premiere on Wednesday June 24th and 25th. The live feeds will start on the 25th after the west coast airing of the episode. So make sure to sign up to CBS All Access so you don’t miss out on any of the action this summer!