Big Brother 14: Janelle and Wil Talk About Their Problems

At 10:15pm on the live feeds Janelle and Wil are in the arcade room chatting. 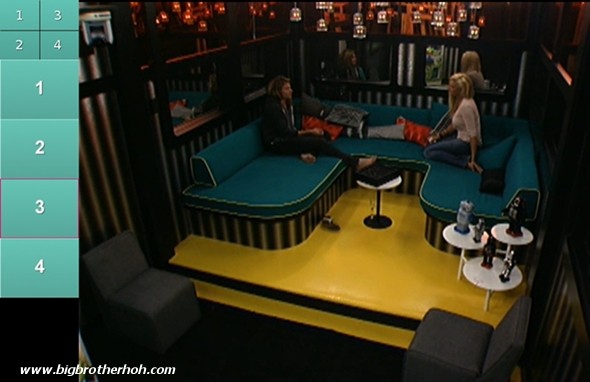 Janelle asks Wil if he’s mad at the way she has been acting towards him. Wil say no and he is not he just wants to know what Janelle is doing. He says he wants to know everything that she is doing that involves him in the game. Wil says he was very upset about her and Ashley sucking up to Frank to keep him in the house. Wil doesn’t like the word mad he wasn’t mad at her at all and he knows she is trying to help him.

Wil tells her that Frank believes he’s safe and that he is not leaving this week. He says that once Frank leaves on Thursday it’ll rattle Ian and Jenn a lot and might lose the HOH. Janelle states that Ian needs to go next week because he can win a mental or endurance challenge.

Wil states that Frank says he will go around and pull a Willie on Joe and call him out on the many things he has said. Janelle really prays he does because she’ll bring up that Frank told Ashley that Wil was his biggest target.