Big Brother 14: Dan, Britney and Danielle Talk About the Game

At 5:55pm on the live feeds Dan, Britney and Danielle are in the backyard chatting. 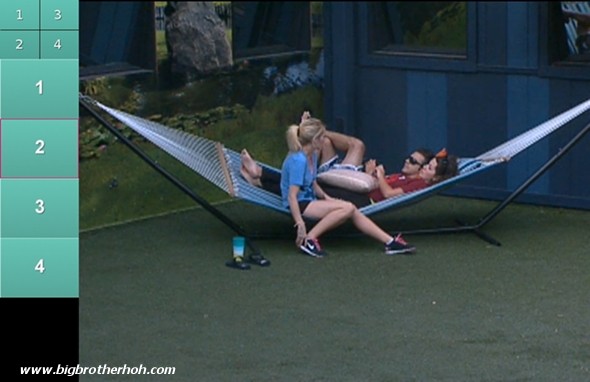 Dan asks Britney that if Shane ended up cutting a deal with any of Janelle’s players. Britney says supposedly they have and that Wil really wants to see Ian gone from the game next week.

Britney states Janelle is very worried about Danielle not voting for Frank to leave. They talk about how Mike Boogies players are all over Danielle in order to sway her vote. Britney reminds them that they have to cut Mike Boogie to 2 votes and Janelle to 2 votes or they will end up with too much power.

Dan leaves and Britney asks her what is Dan telling her to do. Danielle states that Dan really wants her to vote out Frank. Britney says that Frank will be gunning for Shane hard if he’s still left in the house. Britney suggest that she cut a deal with Janelle’s players just incase they win HOH.

Danielle says that Frank was calling her “sweet cheeks” and saying that he was going to be connected to her all week. Britney says that Danielle should just hang out with Shane in the HOH room to keep Frank away from her.