Big Brother 14: Dan and Janelle Are Working Together

At 11:10pm on the live feeds Dan And Janelle are in the storage room chatting. 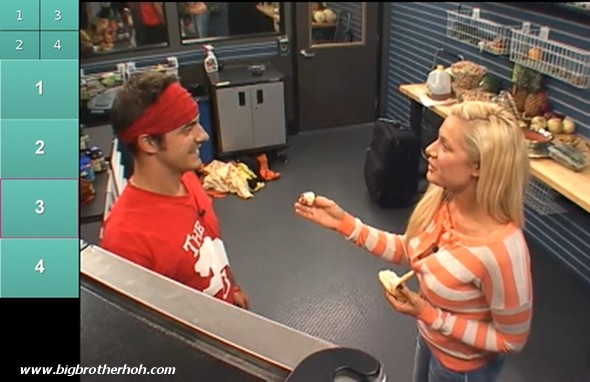 Janelle tells Dan that she was able to get Ashley to put up Ian if she wins HOH. Dan is very shocked that Ashley would be willing to do that since Ian loves her and would never do that to her. They are laughing at how much Janelle has brainwashed her whole team.

Janelle asks Dan if they are still working together when they come back into the game tomorrow and he says yes. Janelle says that she is going to win HOH’s and Dan will pick who they take out. Janelle asks who’s on his hit list but he doesn’t know yet.

Janelle questions if Dan has talked to Mike Boogie about coming into the game. Dan says that Mike Boogie would enter the game if he had 2 players but not if he has all 3. Dan states that if he had all 3 players he would also stay as a coach. Since he only has one left he’s going in for sure and he’s very excited. Janelle is thinking about going in but is not sure what she will do right now. She doesn’t think her players are strong enough to beat Mike Boogie and Dan.