At 3:50pm on the live feeds Britney and Ian are in the living room chatting. 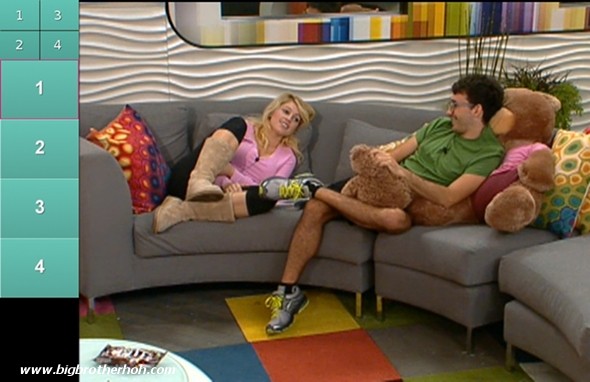 Britney asks Ian if he’s going to try to win the endurance HOH on Thursday. He says that he really wants to try as hard as possible to win it. He also states that he has tried to win every competition that he has participated it but he just sucks.

Ian is telling Britney that 2 RA’s in the same building at his school are not allowed to date each other. He says they don’t allow any kind of interwork place relationships to take place. Britney keeps asking him about some random questions about his dorm life and school. Ian says that he’s also not allowed to date residences but that he once had a flirtmance with a girl. He says it was the way he and Ashley flirt with each other.

Britney mentions that everyone keeps talking about Willie and she is getting tired of it. She says all the Willie stories she keeps hearing are getting a bit old. Ian agrees and says that he heard Shane talked some trash about Willie in his HOH blog this week. They both hope that everyone can just move on and talk about other things in the house.